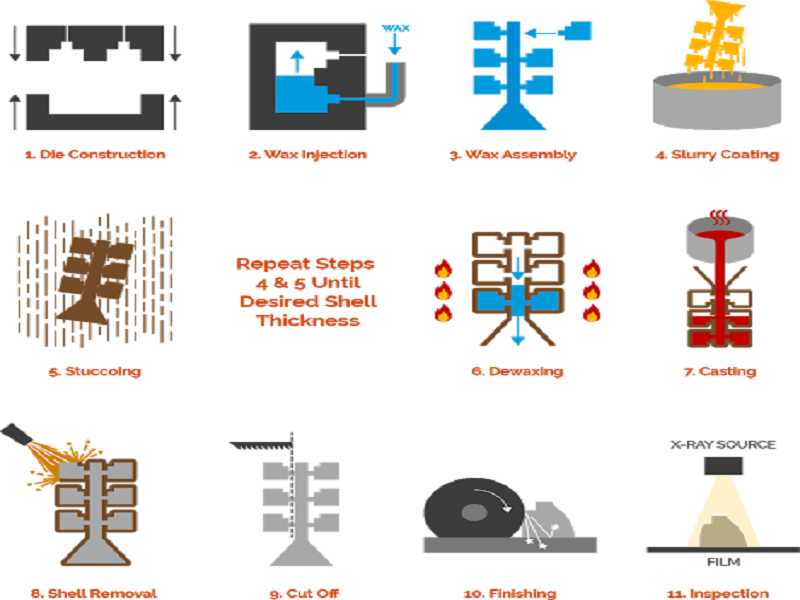 1)  An expendable (i.e. consumable) pattern  , made of Green wax, is produced through an “Injection Press” by forcing hot Green wax at high pressure into a metallic mould called a Die. Several such patterns are assembled by sticking them on to wax bars called Runners or Sprues, to form a cluster, called the “Wax Assembly:.

2) The Wax Assembly is dipped into refractory slurry. The Assembly after a such wet dip is coated with refractory grains, called “Stucco”. This process of dipping and coating is repeated several times, depending on the size and configuration of the component, to create several layers giving the required thickness of coating. The process of surrounding the Wax Assembly with refractory materials is called “Investing” in old English, which gives the process the name of “Investment Casting” process. A casting made through this process is called an “Investment Casting”.

3) The Assembly, after it is thus invested or covered with refractory layers, is dried and thereafter the wax inside the Assembly is removed by melting it inside a steam autoclave. As the wax thus gets removed, and in the past was “lost” by burning off, this process of casting is also called the “Lost Wax Process”.

4) After removal of the wax, the resulting hollow “Mould Shells” are pre-heated in a Shell Pre-heating Furnace to make them strong enough to withstand the metal pressure, when hot liquid metal is poured into the shell.

5) After thus Pre-heating the Mould Shells, molten metal produced in an Induction Melting Furnace is poured into them.

6) Individual castings are cut-off from the cluster, using an electric arc or a gas flame or an abrasive disc.

7) Castings are then “heat treated” as required to get the specified mechanical properties.

8) The process of “Fettling” of castings involves cutting or grinding off of unwanted portions, followed by thorough cleaning and finishing through various processes, to give the required surface finish and dimensional accuracy.

9) In many cases, the castings are subjected to additional operations like machining, surface hardening, electroplating, electro polishing etc, as per customer requirements.

10) After careful inspection and testing, the Investment Castings thus produced are ready for dispatch.

The Investment Castings Process is capable of producing: